New Year and Some Positive News!

We are excited to see positive progress!

On July 23rd,  HHS shared on the wlmh.ca website, the planning, design and conformance team has been selected for the WLMH rebuild! This step is huge as it is further than past rebuild campaigns reached. Tony and team have been making amazing efforts with HHS, provincial and municipal partners, the Foundation and donors to help move us forward.

We thank you for your continued dedication and commitment!  See more information here.

HHS has announced more steady progress! Further to the stage 2 funding announcement at the end of last year, HHS has now also shared details of the key functional requirements for a new WLMH as outlined by the Ministry of Health.

Visit the wlmh.ca page below to view the summary that they have put together as well as a copy of the approval letter from the MoH.

You can download a copy of this summary here as well.

You can also sign up for the most recent news in the monthly newsletters that will be distributed by Hamilton Health Sciences here. 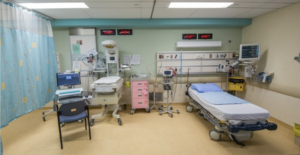 On November 28, 2018 Premier Ford, Premier Doug Ford, Christine Elliott, Deputy Premier and Minister of Health and Long-Term Care, Monte McNaughton, Minister of Infrastructure, and Sam Oosterhoff, MPP for Niagara West, were at West Lincoln Memorial Hospital to announce the government’s intention to rebuild the site. To begin this work, the Premier announced a $500,000 grant to fund early planning. The Provincial Funding Announcement can be found at the following link.

In addition to the planning grant, the Premier also emphasized that surgical and obstetric services will not be removed from the hospital for the over two-year period proposed to begin in early 2019. The government is also investing $8.5 million to support immediate infrastructure improvements while the early planning work for the redevelopment of the hospital is undertaken.

Until There Are Shovels in the Ground!

OUR WORK IS NOT DONE!

The recent provincial funding announcement responded to our communities’ need and the coordinated outpouring of public concern. It is a positive first step. However, our work is not done!  West Niagara residents remember past announcements that did not deliver a rebuilt WLMH.  With the current political will at Queen’s Park, it is imperative that we continue to keep this issue at the forefront.

Therefore, WLMH Save & Rebuild Community Action Group is committed to a long campaign with the following goals:

We intend to stay the course!   This critical work requires funds to support community engagement and effective strategy development.  Funds used are responsibly managed by a local accountant with financial controls in place.

THE COMMUNITY ACTION GROUP IS ASKING EVERYONE IN WEST NIAGARA TO: